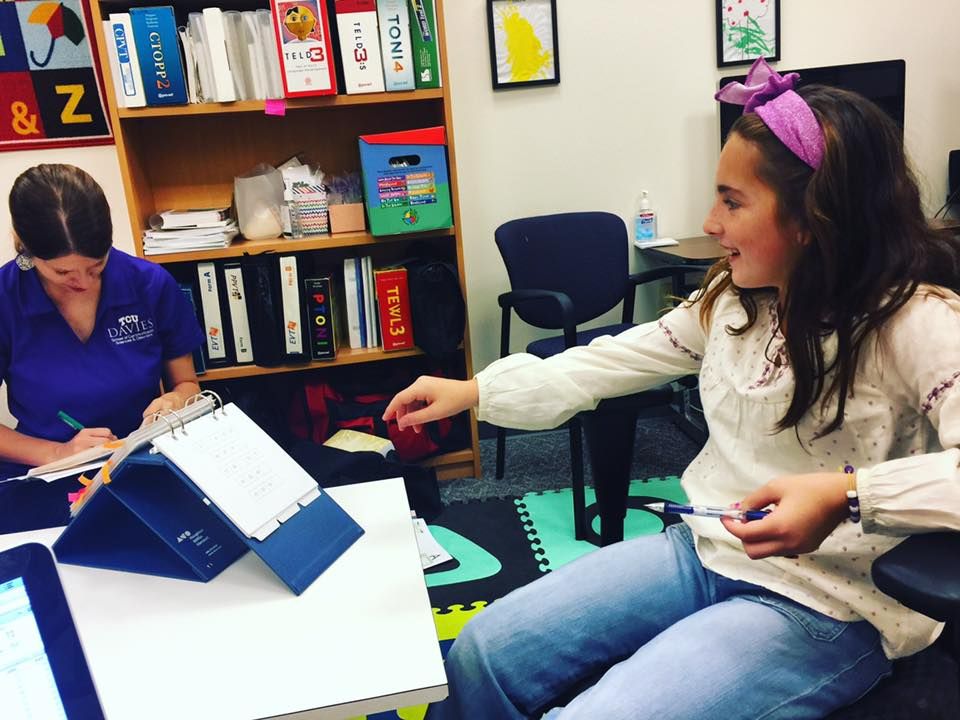 It's that time again...the time we breathe more. When the constant "constants" of summer sibling rivalry, messy beds, messy heads, argumentative pre-teens and as parents, we've secretly been searching for schools we can attend that start on July 1st vs. mid-August! Don't try to hide it, it's true.

For us special needs moms & dads, those aforementioned statements are even more true...well, at least for me. I have both a 9 year old daughter who is deaf, has cochlear implants and had a two-year delay in hearing just about anything.... and a 2 year gap when her brain wasn't fed language. I also have a pre-teen 12 year-old son who struggles, yes struggles, with ADHD. Let me say this...mixing ADHD and TEENAGER HORMONES IS ENOUGH TO SEND A MOM TO A SMALL ISLAND FOR ABOUT A MONTH. I'm shocked I don't own stock in a vineyard.

This time of year is both special and focused for me, the mom of these two strong-willed, special needs kiddos. It's the time I breathe again, but it's also the time of preparation for a long school year. I work with both the school and tutors on their needs. I have to organize, prep for annual testing and prep the school, teachers and classrooms for their needs.

Lexi has prepared me for anything. When we "bridged the gap" and she was mainstreamed, I had no idea that around 2nd and 3rd grade, the alerts that would go off. I had no idea to the volume of what happened when her smart little brain was not fed language for almost two years.

I had no idea how much my son would struggle to balance his racing mind, constantly trying to find peace, and as we take medicine breaks in the Summer, how much I would try to find a corner in a room somewhere to hide because of the tensions it caused.

PLEASE NOTE...I adore both of my kids. But I also know that it's CLEAR why I had one of the most amazing, thoughtful, hard-working, dedicated, God-fearing, "others first" kind of mom growing up. Phyllis. She was just incredible. We lost her to breast cancer and it kills me every day not to have her here. She was a single mom and was the best. And now I know why I had that stoic and stellar example. I was handed a very complicated motherhood.

TODAY, I'll use Lexi to explain a different path to getting her the needs she deserves in the classroom.

In 2nd grade, I noticed something wasn't clicking. Lexi, who attends a wonderful private school in Nashville, well, her testing didn't match up to her classroom grades and report card. While her report card revealed A's and B's, Lexi's school-administered testing for private schools revealed something very different. She was clearly still behind.

I can remember the day, back when she was nearing 4 years old, we felt like we could finally mainstream five days a week from special schooling for kids with hearing loss who use either hearing aids or cochlear implants and whose parents choose oral/spoken language over sign language. I recall how we "bridged the gap" in speech and felt 100% like we were conquering Mt. Everest. She had "caught up." YAY, CHECK IT OFF THE LIST, WE'RE DONE!

NOPE. Not so. This "caught up" my friends, is problem #1. No matter the special needs, we should never, ever think we have possibly fully regained TWO YEARS that were missed. Knowing what I know now, it's nearly impossible.

Now in 3rd grade, I set up a meeting with our new Director of Learning Services. I love her. She's awesome. We talked, I met with the new school Principal and Asst. Principal...both amazing. All three saw just what I saw and wanted to help answer the questions I had been asking for about a year. WHY IS THERE A DISCONNECT? Why aren't the grades consistent with one another?

STEP #1, MAKE AN APPOINTMENT WITH TEACHERS, LEARNING SERVICES AND ANYONE ELSE INVOLVED IN YOUR CHILD'S EDUCATION AT THE SCHOOL.

Next up, DR. EMILY LUND. Dr. Lund was the Speech Pathologist who was with Lexi most of her time as she learned speech from age 2 until now. I call her every time we go thru "something". Dr. Lund is now a Ph.D. and teaches a speech path department at TCU - Texas Christian University.

While the school advises a series of tests at a center here in Nashville before a child can be put on an ISP (private school IEP), Dr. Lund explained that hearing loss and deafness is different and more complicated. She said she would give Lexi some of those tests, but wanted to dive into a couple things that seem to provide complications for school-age kids with hearing loss/deafness:
1. LANGUAGE DELAYS
2. (language delays lead to) LITERACY DELAYS, specifically READING COMPREHENSION
3. CLASSROOM STRATEGIES (not in place, but need to be)
and more we'll dive into.

STEP #2, MAKE AN APPOINTMENT WITH A CERTIFIED SPEECH PATHOLOGIST, PREFERABLY AN AVT THERAPIST who can ADMINISTER A SERIES OF TESTS.

The cool part is this...Dr. Lund said she would give a list of standard tests, but that the first few tests would be standard, then, those results would lead her down the "choose your own story" type path to other tests. So if she was performing to "Lexi's" cognitive level on one test, we wouldn't really need to dive any deeper into that area. However, if she's performing poorly linguistically, let's say on phonemic awareness or something, then she would do more testing in those areas.

But first, my FAVORITE, the NON-VERBAL IQ!!! WHERE IS YOUR CHILD NATURALLY? The non-verbal IQ test, in my opinion, should be given to every child. It's a great benchmark to see where your child is naturally. And for kids like Lexi with any language delay, it allows us to see where she is COGNITIVELY, separate from LANGUAGE.

STEP #3, INSIST ON A NON-VERBAL IQ TEST BEFORE ANY OTHER TESTING IS GIVEN.

So, I have two kiddos and I say this humbly. My daughter performs higher than average on non-verbal IQs. Not bragging, she's just my higher level thinker. And my son, he performs better on matters of the heart. He is 1000000% in Bible, for example. He is my missionary.

So, here's where it gets so interesting. If you would see Lexi's grades on a reading comprehension test, you would assume she is not intelligent. But her IQ scores say something very different. She is smart. But once additional testing was done by Dr. Lund, what was revealed was more language delays and THIS....something we are NOT THINKING ABOUT.
WHAT HAPPENED TO THE BRAIN WHEN IT WASN'T FED? Did it move and send signals normally? If a car doesn't have fuel in the tank, can it move?

Language is so vital to our brain. DYK? The CEREBRUM is the LARGEST part of our brain? It operates in BOTH hemispheres. It is responsible for interpreting touch, vision and HEARING as well as SPEECH, REASONING, emotions, LEARNING, and fine motor control of movements.

In the first 2-3 years of life, a child's brain produces about 15,000 synapses PER NEURON! That's twice that of an adult!

So, for Lexi, she missed this! For kids like her, depending on the age they were either implanted or aided and given sound, or even a child with other language delays, they clearly aren't at the same level as children their age.

STEP #4, RECOGNIZE AND EXPRESS TO ALL PARTIES INVOLVED THAT YOUR CHILD MISSED OUT ON XX NUMBER OF YEARS OF THE BRAIN FULLY FUNCTIONING. Their brains were dormant in some of the most critical development centers! Their brains cannot hold the same amount of material that kids their age can!

So here were Lexi's testing in this order and here's a RECAP of what we found:
Please note, the first score is percent, and the 2nd is GRADE LEVEL. This was administered at the beginning of 3rd grade, so here's the gist:
Lexi's non-verbal intelligence score suggests Lexi is above-average in intelligence and thinking. However, see below. Some of her scores indicate she is behind and ALL low scores are related to two things: LANGUAGE AND THE TIME THE BRAIN WASN'T LEARNING TO STORE/RETAIN INFORMATION OR WASN'T LEARNING TO LISTEN!

STEP #5, A CHILD WITH HEARING LOSS & A LANGUAGE DELAY, WILL LIKELY HAVE DIFFICULTIES RETAINING INFORMATION. FOR EXAMPLE, THEIR BRAIN HAS BEEN STORING INFORMATION FOR LESS YEARS THAN KIDS THEIR AGE. THEY COULDN'T HEAR! So, prepare your school teams for this: However long they were delayed in hearing, retaining and reporting information (in Lexi's case, nearly two years), they may reveal a delay in certain areas by about that number of years.

Pay close, close attention to a score below, however. LEXI SCORED AT A 12TH GRADE LEVEL ON VISUALIZATION story recall. DON'T MISS THEIR STRENGTHS Make sure you pick up on areas where you can integrate into learning. For example, visual cues for a teacher may help a child with hearing loss. We allowed Lexi to start reading a lot of graphic novels to help her build that area of her brain!

STEP #6, These test scores help assess and create a ROADMAP. This roadmap will identify areas where you, speech pathologists, learning services and teachers can focus. However, the areas of strengths should be integrated into those times of therapy! If they are visual learners, then overcome weakness by possibly adding visual cues and clues.

STEP #7, FINALLY -- DO NOT FORGET ABOUT MENTAL FATIGUE. Think about how hard they have to think and listen all day long. This can contribute dramatically to testing. Can you alter what time of day they take tests? Or place Reading and Grammar at the beginning of the day? See more below!

FINALLY, I'm listing the end results and suggestions for LEXI and her CLASSROOM, ISP and more. This will help you have a guide when you visit your SPEECH PATHOLOGIST or SCHOOL TEAM!

Lexi is this in a nutshell. She's a high-thinker. She also has a language delay. Her brain wasn't fed and it doesn't listen and retain information the same way other kids her age does.

LISTENING is the key here. Lexi may hear most -- about 90-93% of what is said, but she is still learning to listen. On the softball field as her coach, sometimes I notice she's like a 2nd grader in listening skills. It's frustrating as heck sometimes! BUT PARENTS/CAREGIVERS, NEVER, EVER, EVER STOP REMINDING TEACHERS AND ADMINISTRATORS ABOUT YOUR CHILD'S NEEDS! YOU ARE THERE ONLY ADVOCATE AT THIS STAGE IN THE GAME. Teach them to be an advocate. Teach them to remind teachers!

VIA OUR AMAZING DR. LUND---
Recommendations: Lexi’s profile is consistent with other profiles reported for children with hearing loss: she demonstrates some linguistic vulnerabilities that appear exacerbated by task complexity and possibly by fatigue. To ensure that Lexi is able to access academic material, I would make the following recommendations:

(I have paraphrased these to shorten and simplify for the purpose of this blog:)

1. PREFERENTIAL SEATING - FRONT OF CLASS, FACING THE TEACHER
2. HAND-WRITE INSTRUCTIONS FOR LEXI IN ADDITION TO VERBAL INSTRUCTIONS
3. LEXI SHOULD GIVE A VISUAL CUE (LIKE TOUCHING HER NOSE) to the TEACHER if she doesn't understand a word or LANGUAGE. The teacher can then expand on it and go over it again without disrupting class. Consider reviewing materials after a lesson...recapping with Lexi.
4. When possible, PRETEACH MATERIAL! Parents or tutors can go over any language LEXI may not understand prior to classroom instruction of that material.
5. When READING IS MORE COMPLEX, READ WITH LEXI AT HOME. Allow her to ASK what words mean and expand on language.
6. MENTAL AND FATIGUE BREAKS - give Lexi LISTENING BREAKS.
7. RETAKE TESTING IN AREAS WHERE LEXI IS STRUGGLING.